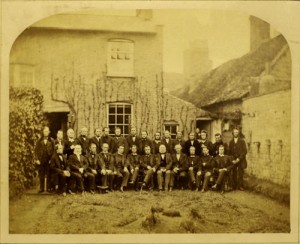 As part of Cambridge History Festival, John Boocock will present a history of Primitive Methodism on Castle Hill on Saturday 28th February at 1530.

In the Biblical account of the Transfiguration of Christ, Simon Peter blurts out the suggestion “Let us build three tents (or tabernacles)”. So, appropriately on St Peter’s Street off Castle Hill, from 1820’s Methodists of the Primitive persuasion worshipped in a succession of ‘tents’: a cottage, a chapel and a church. A tale of this enterprise will be woven round some of the key characters involved.

Starting with Joseph Reynolds, an itinerant evangelist from the Potteries, we move from a hesitant start to a period of consolidation with a John Read as lay leader. The names of others on memorials or foundation stones invite us to explore their backgrounds.

In 1863 the much modified cottages were replaced by a box-like chapel; only to be transformed fifty years later, just as World War I started, with the present church, which links through from St Peter’s Street to Castle Street.

In 1932, the Wesleyan, Primitive and other branches merged in Methodist Union, but Christian witness on this site has continued now for nearly 200 years.

John Boocock is a Methodist local preacher and life-long member at Castle Street.

Tickets are £3 and may be booked through Eventbrite.

This entry was posted in Archive.